SADAKA means THE GIFT in Krio, the lingua franca from Sierra Leone, Seydu’s country of origin. This country was one of the focal points of the slave trade in the eighteenth century and has also suffered a diamond civil war and an Ebola epidemic. Seydu continues the tradition of the Fulha troubadours and keeps the original music from Sierra Leone and Liberia alive, the
“Palm Wine Music”, or “Maringa” . He is considered the successor of artists like deEbenezer, Calendar & His Maringa Band and S.E. Rogie.

Seydu’s life has been a real odyssey, he escaped the war at a very young age in a small boat and arrived at the Canary Islands as an illegal immigrant, but thanks to his talent and generous heart he managed to find his own place in the European and Spanish world music scene, playing with renowned musicians such as Kiko Veneno, Yossou N´Dour, Mariem Hassan o Cesaría Evora 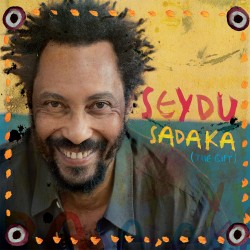 Sierra Leone, the country of palm and wine music – the maringa, is engulfed in chaos. The cheerful notes of a guitar wtih a calypso flavor have little to do with the times at hand. Less Caribbean and less sophisticated is the yole, of local origin and tied directly to the cycles of nature. These styles have come to Seydu first hand through his family – through the songs handed down to his mother in Fulah Mandinga, and through the rhythm of his grandfather´s drum. He has also learned to master the resonating sounds of the sanzas.

But Seydu´s music is neither rural nor primitive. As a restless musician, he has kept himself alert to the wave of eastern influences wich have swept the black continent in the form of afro-beat, reggae and the music of Osibisa, Fela Kuti or Alpha Blondy. The Spanish experience has also given him yet another base to draw upon. His years of work alongside Kiko Veneno, Raimundo Amador and other distinguished Spanish innovators have not been in vain. Expressing himseld in such diverse languages as Krío ( a local pidgin English ), Fulah, Spanish and English, he gives life to a rich world of his own musical expression which is the living reflection of cosmopolitan Africa.

Diamond Tears is a masterpiece of West African music in general. Although characteristically percussive, the songs are unmistakably melancholic. Seydu´s message – sung in Creole and English – goes beyond tales of love and other beatiful things. He expresses his pain about the devastating Diamond War that´s ravaging his homeland.

Together with Lokua Kanza and lots of other excellent musicians, Seydu weaves a melodious web with an atmospheric density that is unparalleled. The 13 songs – many stick in your head long after the CD is over until you just have to listen to them again. 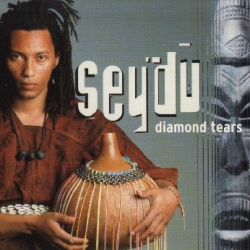